Hyperstorm is a science fiction roleplaying game set in far future of the humankind and what would science fiction be without futuristic weapons. Because the 5th edition SRD does not provide specific rules for modern firearms we had to come up with rules for those. The rules presented here are based on the available rules in the SRD v5.1 and we aimed to retain the same level of simplicity and spirit of the  original rules. 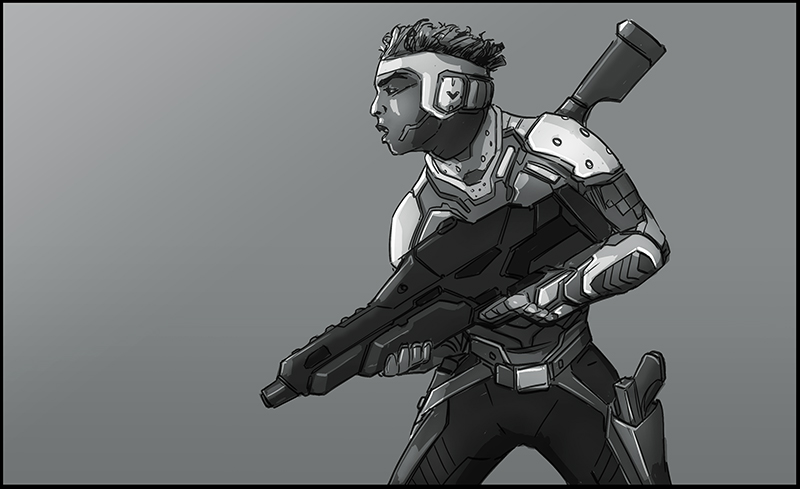 As the 5e SRD is more geared towards melee combat, adding the rules for modern firearms and space opera setting required a few well justified adjustments.

Ranged and melee weapons are grouped into following proficiency groups.

Credits: Cost is given in Consortium credits (cr) – also known as chip – and for compatibility purposes 1 cr is equal to 1 sp. Larger sums are measured in kilocredits (Kcr) – or K-chips – and each kilocredit is worth 1000 consortium credits.

Weight: Hyperstorm uses metric system and all the measurements are converted to meters and kilograms.

Range: For simplicity ranges and movement are mostly rounded to the closest 0.5 meters and one pound is rounded to 0.5 kgs.

Instead of listing Ammunition and Reload properties with ranges and shots for every weapon separately these values are listed in their own columns to save space. The values are listed for all the ranged weapons, except for thrown melee weapons.

If the weapon has only one range value, all attack rolls are made like they would be inside optimal range and the weapon cannot attack beyond this range.

The Damage values are designed to be inline with the existing weapons. They are somewhat more powerful than the conventional melee weapons, bows and such, but not excessively so. While the damage values for the firearms are not as high as in some d20 System or 5th edition based games, the damage output of these weapons can be quite significant when taking the increased rate of fire into account. Also, some of the weapons have new Weapon Properties that can make them more effective against armored targets or cause more devastating damage on critical hits, for example.

The first reason for this approach is to support the cinematic and heroic style of play (i.e. we didn’t want to make firearms point-and-kill weapons). Another factor in the design is the fact that hit points do not alone represent a creature’s physical health or toughness and therefore damage does not represent only the capacity to cause physical trauma.

Hyperstorm uses the familiar Damage Types, but their application is made more suitable for a science fiction setting. Possible alternative names for more flavor are in parenthesis, but for now the original names are used.

Some weapons require the target to make a saving throw. Unless otherwise noted, the DC is equal to 8 + Proficiency bonus + Dexterity modifier.

The Following combat actions are new or replace the existing ones.

Weapons with Autofire property can fire salvoes of bullets or energy pulses to gain fire superiority on a tight spot or lay down suppressive fire to pin down the enemy and provide covering fire for their comrades.

Autofire can be used in two ways: more controlled burst fire or suppressive fire that affects a large area. The player can decide how many salvoes the character fires and the maximum amount of salvoes is determined by the weapon’s Autofire property.

Each salvo consumes 5 shots of ammunition and allows to make a single attack . If the weapon has less than 5 shots left, the attack is resolved as a normal attack and the weapon must be reloaded before it can be fired again.

Salvoes can be spent one at a time up to the Autofire value of the weapon.

If the character has Extra Attacks they can be used to increase the number of maximum salvoes, when using autofire attacks. For example, if a character with two extra attacks would spend all the extra attacks to fire an autopistol in autofire mode, they could fire up to 4 salvoes. The same character could also fire up to 3 salvoes and make a single attack with another weapon they are wielding.

When firing autofire against a single target, the first salvo is done with an advantage. All the following salvoes are done as normal attacks.

A separate attack and damage roll is made against each target. An extra salvoes can be spent to gain additional attacks agains a target.

Weapons with Burst Mode can lay down Supressive Fire to keep the enemy in cover. Each salvo of suppressive fire targets a 3 × 3 meter cube and all the targets within that area must immediately succeed on DC (8 + Proficiency Bonus + your Dexterity modifier) Dexterity saving throw or they must go prone as a free action and can take only Reactions on their next turn. If the saving throw result is a natural 1, the target also takes normal damage from the weapon, but without any Dexterity modifiers. Each additional salvo in the same area increases the DC by +3.

The attacker can perform a lethal hit on an stationary and unaware or helpless enemy. A character cannot move or take reactions during the round they are taking this action or the action is cancelled. Coup de grace also provokes an attack of opportunity.

The target must be within the weapon’s reach for melee attacks and within the optimal range for ranged weapons. Melee attacks hit automatically, but for ranged attacks the attacker has to make an attack roll with an advantage. If the target survives the attack they must make a DC (10 + weapon damage) Constitution saving throw or die immediately on a failed roll.

Pistols are considered light weapons for the purposes of two weapon fighting.

The following guidelines apply to reloading firearms and other ranged weapons.

If the weapon has different firing modes or settings (single shot, autofire, stun, etc), switching between them requires a bonus action.

Firearms and energy melee weapons are widely used in the universe of the Hyperstorm RPG. The rules represented below are used to handle these more advanced weapons

The following weapons are more or less examples and place holders.

« Compatibility matters
Hyperstorm now on Patreon »
We use cookies to ensure that we give you the best experience on our website. If you continue to use this site we will assume that you are happy with it.Ok